Voyant is a web-based text analysis environment that helps you visualize the distribution of words within a single text or compare their usage across a number of texts.  It’s very easy to use: simply upload the files or urls to the site, and you are directed to a breakdown of their content in a series of windows that looks like this: 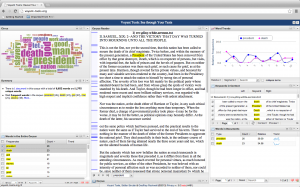 First, you’ll want to click on the gear icon on any tool window and apply a stopwords filter globally so that you are not burdened by data on words like ‘the’ or ‘with.’  The output in the tool windows, all of which can be exported in a variety of formats, offers word counts, word trend lines and lists of keywords in context (KWIC) that provide a number of ways to “see through your texts.”  In the following analysis, we examined how the word trend graph can complement qualitative analysis of word usage.

There is a pivotal scene in Steven Spielberg’s Lincoln in which a telegraph operator nervously awaits the president’s message for a Southern delegation. It is the key moment when Lincoln must decide to either accept the delegation’s peace terms, which would undoubtedly preserve slavery, or press on with the war while working to pass the 13th amendment to abolish slavery permanently. In one particularly striking shot, the heads of the operator and the President are tightly framed by the telegraph station’s window; the composition shrewdly conveys the intimate tension of a moment sure to frame Lincoln’s legacy.

This conflict between uniting a country in peace and fighting to correct a moral wrong is also a point of contrast in how different speakers addressed the meaning of Lincoln’s death. As a map of the sermons illustrates, the northernmost sermon in the collection is that of Rev. Pliny White in Coventry, Vermont, while Rev. Charles Lowe delivered the southernmost sermon in Charlestown, South Carolina.  While they were delivered on the same day (April 23rd), the two sermons are quite different.  White’s sermon focuses on Lincoln’s role in abolishing slavery while Lowe’s sermon emphasizes the need for peace and unity in the aftermath of the assassination and the war.

For an expanded summary of the two sermons, click here.

Rev. Pliny White’s sermon in Vermont corresponds with the idea of Lincoln as martyr. White outlines three points that structure of the bulk of his sermon: 1) a tribute to Lincoln, 2) a search for consolation, and 3) a consideration of how the nation must respond.

In the first section White touts Lincoln’s integrity and grasp of common sense, leading up to his strongest accolades for Lincoln’s emancipation of the slaves, which he describes as “the crowning act of his life.”  The end of slavery is the basis for White’s argument in the second section in which he seeks consolation in the idea that Lincoln’s death was divinely permitted since he had fulfilled his work of ending slavery and quashing southern rebellion.  In the third section, White emphasizes the importance of Andrew Johnson’s role in seeking justice and calls for the execution of rebel leaders. In sum, White frames Lincoln’s martyrdom as directly related to slavery, stating it most clearly in the middle section:

“The assassination of the President was not the work of an individual. – It was the spirit of slavery that fired his heart and nerved his hand.”

Rev. Charles Lowe’s sermon South Carolina is markedly different in style and substance.  Visiting from Boston, Lowe was openly self-conscious of his position as a northerner addressing a southern congregation. At no point in the speech does he mention the word slavery.  He approaches the southern rebellion as an act of human weakness and compares Lincoln to Christ primarily in terms of mercy, suggesting that had “his lips had power to speak, who can doubt that his language would have been, forgetting all personal wrong, ‘Father, forgive then; for they know not what they do!’”

In contrast to White’s call for retribution, Lowe makes an ardent plea for unity, instructing southerners to pledge loyalty to the Union as a necessary condition for peace.  With peace as his focal point, Lowe concludes the sermon by addressing the delicate matter of changing southern sentiments and relinquishing animosity.  In sum, Lowe positions the news of Lincoln’s death as a call for peace, stating most clearly in the middle:

“[P]erhaps it was that the horror at the deed gave a thrill of indignation that was in sympathy with the Union side: but it matters not what the motive may have been, –that event has done more to hasten the true conditions of peace, than would have been done by months of ordinary endeavor.”

Sermons often peak with a central idea in middle, and the word trend graphs in Voyant provide a handy visualization.  We found that the key words for White and Lowe, ‘slavery’ and ‘peace’ respectively, both crested in the middle of their speeches.

Across the corpus, the sermon in which the word ‘slavery’ is used most frequently is R. Jeffery’s June 1st sermon, titled “The Mission of Abraham Lincoln.”  To see how Jefferey’s usage of the word ‘peace’ compares to his emphasis on slavery’, we start with a word trend graph. 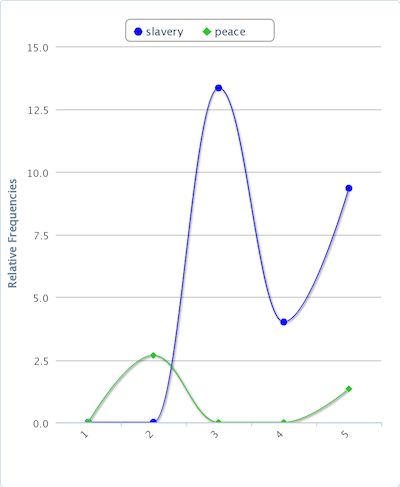 As the graph demonstrates, the word frequency of ‘slavery’ greatly exceeds that of ‘peace.’  Even more illuminating is the keyword in context data. Here, we can see that not only does Jeffery mention the word ‘peace’ infrequently, he usually refers to it in a negative context. 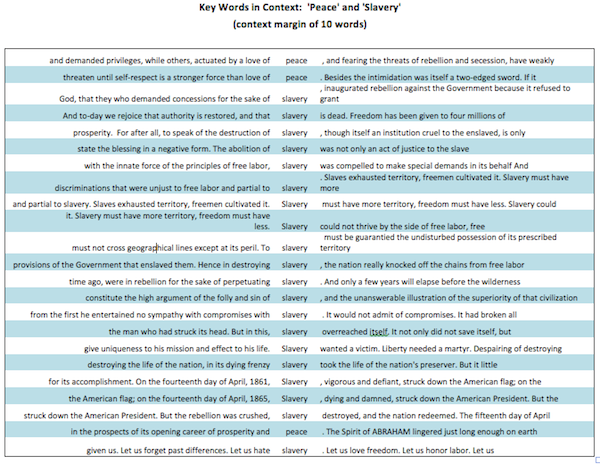 The above examples provide just glimpse into how Voyant can help you analyze textual trends.  To try it out on the sermons, simply paste the url from any of the sermon pages into the Voyant homepage.